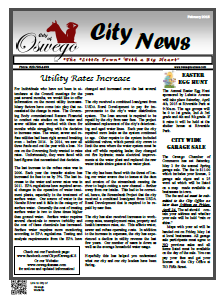 For Individuals who have not been in at-tendance at the Council meetings for the past several months, we would like to offer information on the recent utility increases. Many factors have come into play that ne-cessitated the change in rates. The Govern-ing Body commissioned Ranson Financial to conduct rate studies on the water and sewer utilities and worked with them for months while struggling with the decision to increase rates. The water, sewer and re-fuse utilities had been right around breaking even – before 2014. In 2014, we saw all three funds end out the year with a loss. No one on the Governing Body wanted to raise rates. Unfortunately, they were faced with hard figures that necessitated that decision.

The last increase to the refuse rates was in 2006. Each year the transfer station has increased its fees to us by 3%. The last in-crease to the water and sewer rates was in 2011. EPA regulations have required sever-al changes in the operation of water treat-ment plants, especially in the treatment of surface water. Our source of water is the Neosho River and it falls in the category of surface water. Generally the cost of treating surface water is two to three times higher than ground water. Surface water requires several chemicals to remove turbidity and the cost of these chemicals has increased. Surface water requires more monitoring according to EPA regulations. Read More